I have read about the heavier rackets for training. Finally I came across few and I bought Victor Wrist Enhancer 140. I bought it via Victor distributor in Delhi. They person with whom I interacted was really helpful in getting the racket across. It cost me around Indian 4000 rupees in total.

There are two version of training rackets from Victor, Wrist Enhancer 120 and 140 which are weighing at 120 grams and 140 grams respectively. I went for the heavier one since in general normal rackets that we use weighs in at around 90 to 100 grams with grip and guts.

WE 140 is really helpful when doing toss and strokes. In general the usage pattern that I follow is to use it while doing shadow or mostly when doing strokes. Use this racket only for short duration. I use it from 5 minutes to 15 minutes depending on how fatigued my hand is from previous day's games or how energetic I am feeling. Because of the heavy swing, there is a chance that you might yourself. After using this, I was able to feel the difference in wrist power. I was very careful when using this during initial days and did not go overboard, as it easy to injure yourself.

Weight of this racket with thin grip and guts come to around 144 grams. 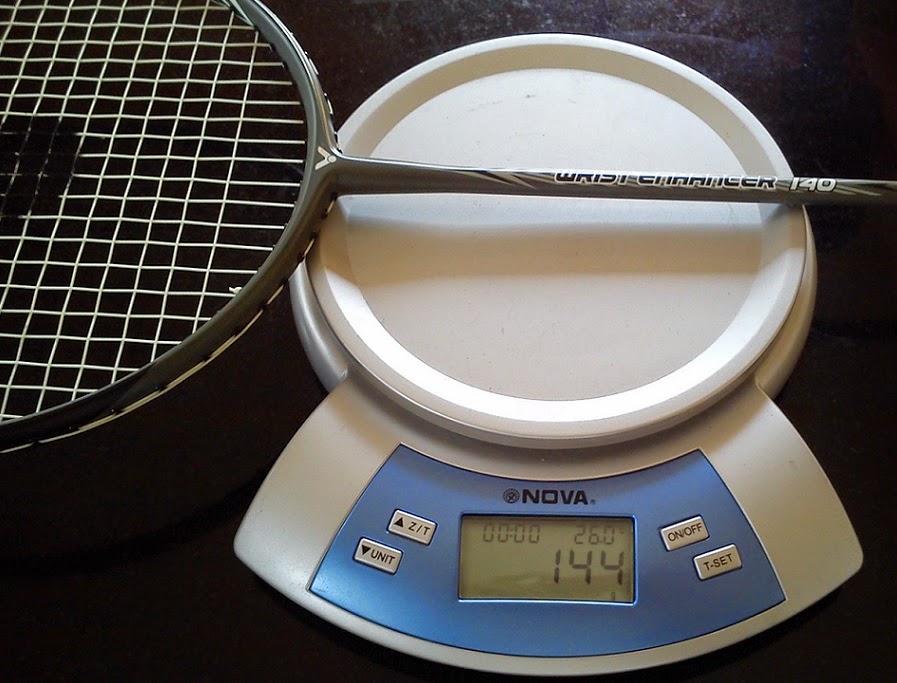 Weight range of the basic racket is marked as between 130 and 140 grams but with grip and guts added it goes up to 144 grams:

Initially I used it only for tossing. Maximum tension that can be given for WE 140 is 24lbs which is fine. But right now, I think the gutting that has been done is at a lower tension, hence its is a bit tough to send it from one baseline to the other baseline.

This racket is like a long term investment. Do not expect over night returns. This racket along with upper body strengthening can show some results is my observation based and that too based on your skill levels.

Link to Victor site with details of WE 140: http://www.victorsport.com/product_detail_1173.html

Other training rackets I came across are Yonex Isometric TR1 badminton racket. The weight of this racket was coming in at around 120 grams. In addition to that they had a mesh cover that can be put on the racket to increase with the weight of the racket while doing shadow. This was not available in India and I even called Yonex Sunrise India to no avail. Link with pictures and details of the racket:  http://www.yonex.com/products/badminton/racquets/training-series/isometric-tr1/

Another training racket I came across was Strength Pro. They also had two variations at 140 and 160 grams each called SP 140 and SP 160. SP stands for Strenght Pro. This would have to be imported to India from UK. They do ship to India but due to the customs hassle I did not go further with this. They respond very quickly to your query and was helpful with suggesting racket suggestion and usage. Link with pictures and specifications of this racket: https://www.strengthpro.co.uk/
Posted by SharathCV at 2:59 AM