A non-technical book that I read after a long long time. This book has 231 pages and is from NIMBY BOOKS (ISBN: 97881-906570-3-7). Simple English and an easy read. Good to read about Saina's childhood and how her parents put in lot of their effort to  help build Saina's career. 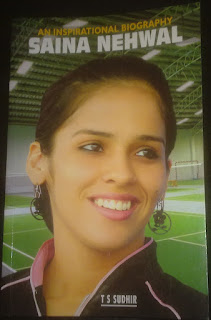 Even though it is a book about Saina, it was great to know about Gopichand and his All England victory. The details around this victory was good. Gopichand is one of my all time favourite player. Was nice to read about the strong commitment, focus that Gopichand had during his days as a player. I have seen his match against Peter Gade and Chen Hong on YouTube leading to All England victory. Truly superb matches. The way Gopichand held the shot and played it at the last moment with deception against the then world's top and deception king Peter Gade is worth watching. The amount of commitment and seriousness he has towards running his academy is nicely detailed. I admire Gopichand’s temperament. One full chapter in this book is dedicated to Gopichand with the heading "THE ROLE MODEL".


Details on some of the matches that Saina played and what she went through during those matches was good. Details of Saina's training are mentioned here at a very minimal level. Reason for decline in her performance in start of 2011 and why she changed her coach in between to Babu is mentioned in this book.


Overall a good book to read for someone who loves badminton and is fan of Saina and Gopichand.


There is another book by Saina called "Playing to Win" published recently. Planning to buy this book next. Then there is another book by Lee Chong Wei with the title "Dare to be a Champion". That would be the read after "Playing to Win". Then there is a book by Peter Gade , currently only in Danish, English version is supposed to be out in January 2013. Not sure if Lin Dan has already or has a plan to publish a book with his badminton story.
Posted by SharathCV at 2:08 AM No comments: 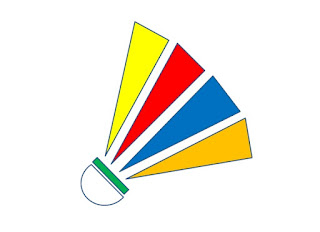 This is the new icon that I designed for my blog Badminton Galaxy.
Posted by SharathCV at 10:28 AM No comments:

I finally got time to start a new forum. Following is the link to the same: http://badminton.freeforums.org/index.php

Currently there are only two topics:
- General
- Badminton Topics

General category would cater to all non-technical items like introduction, discussion regarding diet etc.

Feel free to drop me a mail/comment on how I can improve the forum (content, layout, colors etc.). I will be adding number of categories and forums as and when I get time. If you have any specific category or forum that needs to be added, please let me know.

Screenshot of forum is shown below: 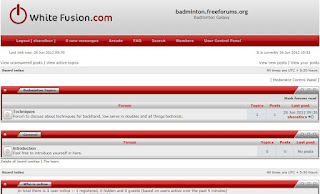 Posted by SharathCV at 10:37 PM No comments:

Backhand is one area that I struggle a lot. This is one of the best link that I found on the internet. Steps are explained in a 1-2-3-4 format which is really great and is helping me. Here is the link for all out there who are trying to improve their backhand.

Link to video on improving backhand

Posted by SharathCV at 2:21 AM No comments:

A friend of mine and myself participated in "Corporate Indoor Sports Fiesta - 2012 on 25th Feb 2012. It was Organized by Badminton Bangalore at Gopalan Sports Center, Whitefield. Anup Sridhar was the Chief Guest. Got to meet some fellow players from corporate area. I participated in doubles. We lost even though we won the first game. I think my partner (Venu Sai) and myself rushed a bit in the second and third game which resulted in us loosing the match. 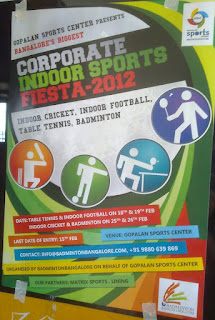 Got a chance to take photograph with Anup Sridhar as well: 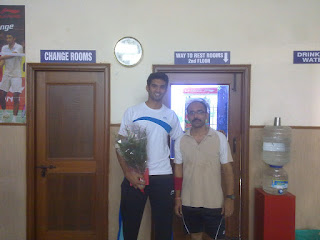 Pulav served during lunch break was extra spicy :). Overall it was fun. Roof is a bit low and the shuttle flies a bit fast in this arena. Was good to play on the green mat.

Tournament in progress after lunch break: 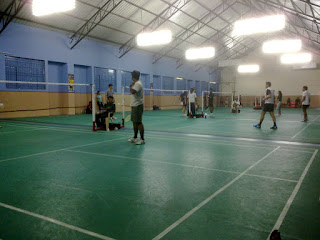 Posted by SharathCV at 8:07 AM No comments:

Shuttle quality varies from barrel to barrel and also within a barrel. Some of the shuttles are a bit fast. Found these shuttles to be slightly more lasting than some of the other brands in same price range. Will try using other brands post my thoughts on those brands as well. Pictures of Coxel shuttles are shown below: 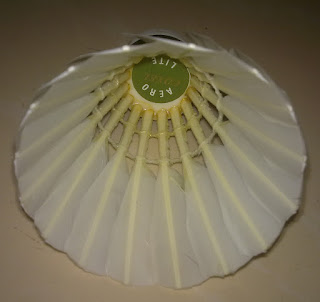 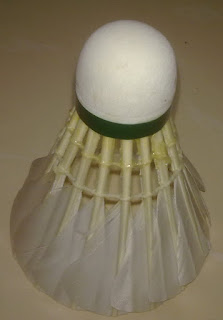 Posted by SharathCV at 4:26 AM No comments:

Yonex Voltric 80 is my favourite racket. It is a 4U. Currently I am having grey Nanogy 95 (shown in photograph) guts on it at 26 Lbs. This racket is very good for smashes. Durability of this guts is good.

Initially I had white BG 66 Ultimax gut at 28lbs on this racket, which did not last for more than 2 weeks. 28lbs was not comfortable for me since the retention was less.
Had couple of hard clashes while playing doubles and nothing happenned to the racket. Paint coating had gone off in couple of places because of the clash. 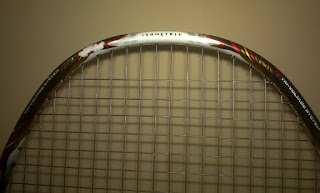 Once the currenty Nanogy 95 breaks, I will change the guts to BG 66 Ultimax at 25 lbs to get some more retention power.
Posted by SharathCV at 9:37 AM No comments: 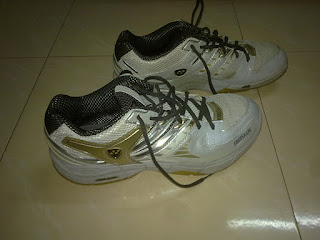 SHB-SC5EX is the Yonex shoes I bought after a lot of research on their 2011 catalogue. I wanted to buy White and Red SHB-92MX, but was not available.

Overall SHB-SC5EX is fine. It has 3 layer Power Cushion around heel as well as in front area. One problem I faced was that wearing a socks which has thick lower layer can lead to ankle twist since the shoe as such is high. I was able to get thin sports socks from Nike which is suitable when using this shoes.

With my earlier shoes (which was a Reebok), I used to feel pain in front portion of my feet while playing, with this Yonex shoes I don't feel that pain at all.
Posted by SharathCV at 9:05 AM 2 comments: 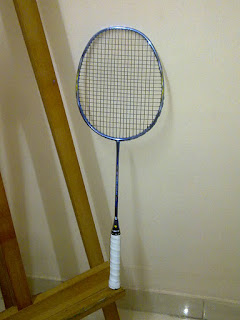 This is my first post in my badminton blog and thought I will start with a short review of Carlton Optimax Viper 9.5 that I bought in second half of 2011.
This is a light racket weighing 76 to 78 grams without guts. Grip size is G5. It came with Xcelerate x67 black color guts. Strung it at 30 and still not broken. I play only during weekends. Color of the racket is blue with a shining finish. Looks like a sword. Came with a white thick Carlton grip. I had to put an over grip on this. It has a carbon handle. 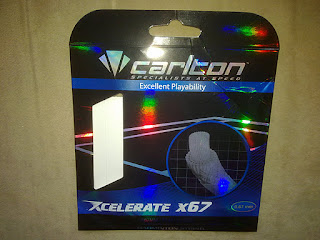 Need to hit hard to get a powerful smash. I had the guts strung at 30lbs, will try at lower tension once this gut breaks and provide further review on this.
Specification on the gut packing is as follows:
Power: 10
Control: 9
Durability: 8
Resiliency: 9
Hitting Sound: 9
Specification of the racket and some pictures of the frame are shown below: 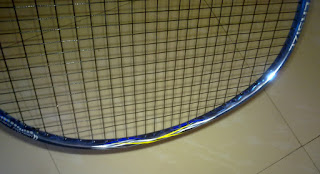 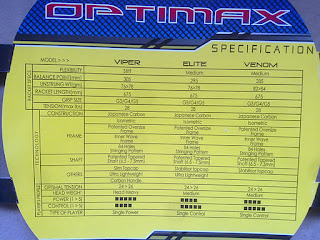 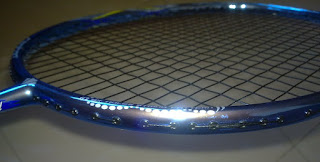